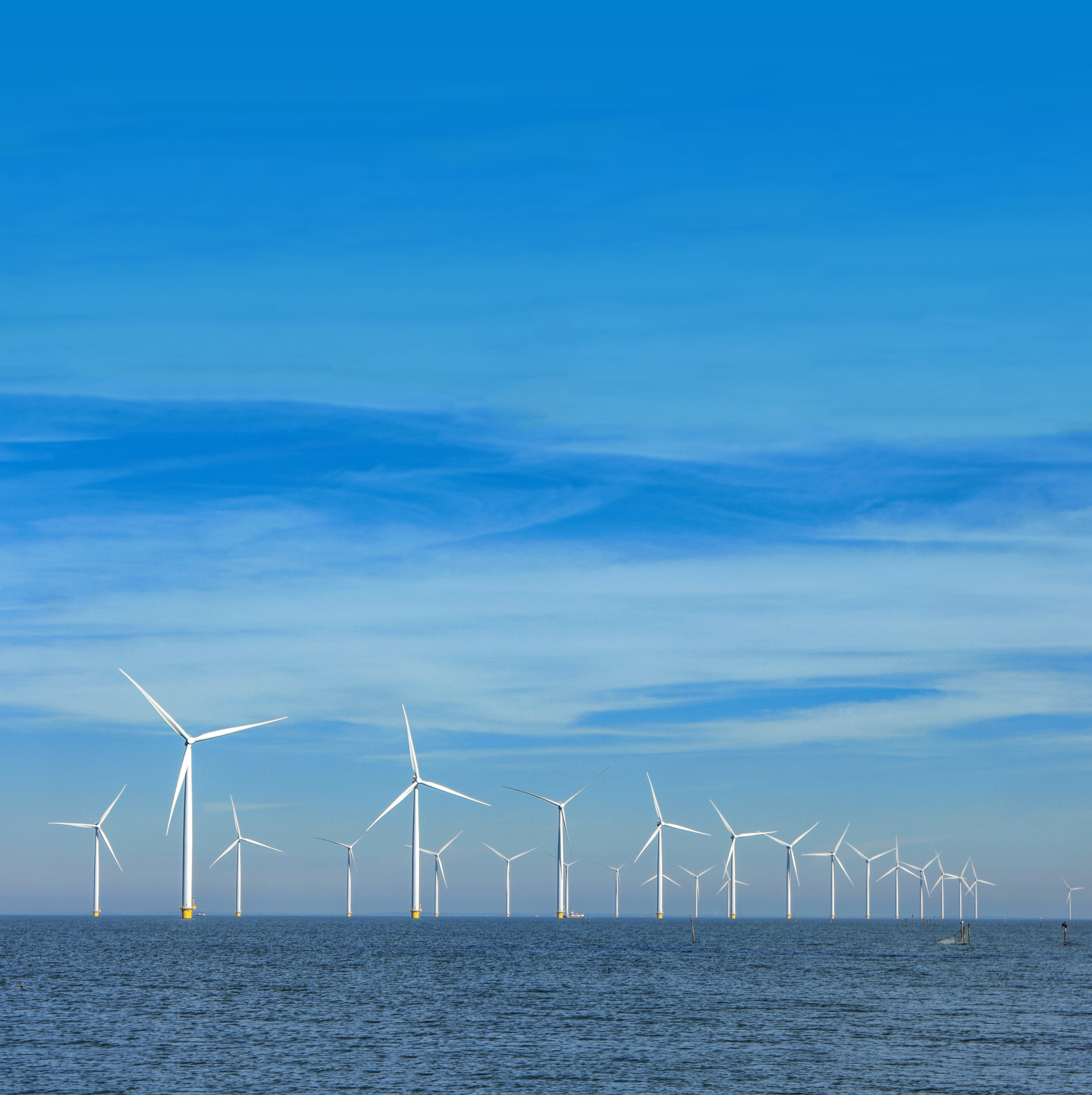 Open a satellite map of Europe and wander along its coastlines, a little bit away from the shore. Go along the Northern Sea borders, venture east to the Baltic or go south in British and French waters. On a cloudless day, you might see them clearly. Dozens, even hundreds of them, in precise geometries. White dots piercing the sea, stirring dusty plumes that curve on the waves. They are offshore wind turbines catching the wind to produce energy from thin air.

For the first time, in 2020, renewables surpassed fossil fuels as the top energy source, providing 38% of Europeans’ electricity needs. Although still overshadowed by wind farms on land, offshore wind energy is making a march of its own. In 2020, Europe boosted its offshore capacity by 2.9 GW, and today with over 5,000 offshore turbines generates a total of 25 GW of installed capacity across twelve countries. This, however, is still far behind the EU’s ambitions to rely on at least 60 GW of offshore capacity by 2030 and get to 300 GW by 2050. The European Commission also wants to see today’s offshore’s 3% contribution to the electricity market go up to 15% in 2030 and 30% by mid-century.

It is possible for offshore wind to meet even the EU’s highest expectations, says Ivan Pineda, director of market intelligence at WindEurope, an organisation that represents the wind industry. “Today we build about 6-7 GW per year, but three years from now we need to move to 11 GW annually if we want to create four times the offshore wind capacity we’ve built in the last 15 years,” says Pineda. But how can the 27 countries hugely accelerate their offshore efforts in just nine years?

The industry’s desire to expand is there. Take Belgium, where in the last decade wind farm developer and operator Parkwind has built four offshore wind parks, which now deliver almost 10% of the country’s energy demand and have helped the small nation become one of the world’s five leading countries on offshore wind projects. And Parkwind provides only a third of Belgium’s total installed offshore capacity. “Annually, we produce enough power to supply about 750-800,000 households,” says Vedran Horvat, head of communications at Parkwind. “Potential for growth is big, and if all commitments are delivered as planned, we can keep our pace. But getting there is not going to be easy.”

Although in 2020, offshore wind in Europe received a record 26 billion euros in investments and investors are increasingly exploring Spain, Portugal, and other wind-rich areas in the Mediterranean Sea, WindEurope says that the geography of offshore wind will not change that much. Waters in northern Europe, which are shallower, will probably continue to host 85% of the continent’s offshore wind projects – seeing a bigger density of wind parks, says Pineda.

But given that offshore wind turbines can be installed mainly in relatively shallow waters and connecting them to the electricity grid requires proximity to land, finding the space close to shore with good wind conditions is critical. “Offshore wind is just the last of the industries coming to use the seabed and sea space,” says Pineda, as shipping and fishing vessels have long been the main users of coastal waters. To reach those 110 GW by 2030, countries need to allocate enough space for offshore wind farms well in advance, given that it can take up to a decade from planning a farm to making it fully operational, stresses WindEurope.

Another way to make space for offshore wind is going further at sea. In deeper waters – between 50 to 1,000 m – floating offshore turbines could help Europe get closer to its clean energy goals. Spain, France, Norway, Denmark, and Germany are leading the way in building floating wind farms, which are not commercial yet. According to the European Commission, the Mediterranean and the Black Sea are especially good candidates for the new technology. In Spain, which could provide up to 22 GW of wind energy from offshore floating farms, major utility company Iberdrola is planning to invest over one billion euros into a 300 MW floating wind farm. “Floating turbines will soon allow us to build farms where it was previously deemed too costly or physically impossible,” says the Danish wind turbine company Vestas. “The upper limit is how much wind energy is available globally and how much energy can turbines extract.”

Ramping up the power

The manufacturers’ desire to expand is there too. In the last five years, wind turbines have become more powerful, growing in capacity at over 15% per year. While the biggest offshore turbines today are 9.5 MW, Vestas just announced the launch of a 15 MW turbine – the most powerful in the industry.

But making the most out of technological progress calls for changes in infrastructure. “With upscaled turbine technology and turbines with rotors of over 200m in diameter, the need for infrastructure and waterside facilities is paramount to be able to install offshore wind at increasing scale,” Vestas told Euronews. “Scaling up will deliver cost reduction benefits for consumers, but often port facilities and other infrastructure are not available at a bigger scale.”

Across Europe, ports are dedicating space for offshore wind activities – whether as sites for transporting turbines to construction sites, manufacturing and maintaining parts or as export hubs for offshore components. Harbours such as Bilbao, Cherbourg, Gdynia, or Aalborg are part of WindEurope’s Offshore Wind Ports Platform, which brings together ports already supporting offshore wind or interested to learn how to boost the industry. By concentrating key activities in one place, ports can help cut costs, making offshore wind energy competitive with other renewables. “Going forward, investments in ports are very important,” says Pineda, “but they need to invest about 6.5 billion euros if we are to meet the 2030 targets.”

So what about the wind? Just how windy an area is can make or break a project, and developers need climate data to know what to expect. Vortex, a Barcelona-based company, uses data from the Copernicus Climate Change Service (C3S) to help companies assess the climate variability of potential or existing wind project sites. “Data on things like wind direction and speed at different heights is crucial. An 8 versus 8.5 meters per second wind speed can change the project’s layout, the turbines used, even its whole feasibility,” says Gil Lizcano, R&D director at Vortex. But as measuring wind behaviour at sea can be challenging, most projects rely on climate models, Lizcano explains.

Providing accurate data is critical, especially before setting up wind farms. Vortex uses climate information from the last 20 years to provide a better image of wind conditions in the present. More extreme wind conditions could push up the price of infrastructure – as sturdier turbines cost more – but also make the farm more profitable. Knowing how the wind will behave is also essential for day-to-day farm operations, especially for understanding how much energy will go into the grid.

Manufacturers like Vestas use climate data to decide on the equipment to use. “For our harsher northern European markets, where cold winds are expected, we have anti-icing technology,” the company said. “Offshore turbines also have anti-lightning technology that ensures the blades keep spinning even during storms. We’ve also increasingly digitalised our turbines to adjust the blades to specific wind conditions so that the most wind is captured at any one time by all the blades in a farm.”

Although making long-term predictions on wind conditions remains difficult, some experts have been exploring how climate change could affect offshore wind energy in the coming decades. Relying on C3S data for wave height and wind speeds in the past and for the near and far future, British environmental consultants JBA Consulting simulated how a wind farm with 100 turbines would operate in different areas in Europe. Modelling can help investors evaluate the climate resilience of wind farms and assess its financial implications for the project.

Although wind resources are not 24/7 energy suppliers, the industry is getting better at capitalising on them. “With renewables, you will always have an intermittency issue,” says Parkwind’s Horvat. “However, offshore wind resources tend to be quite consistent. As grids get better managed and connected, balancing supply and demand can improve, delivering the power where it is needed.”

Offshore wind’s success will also depend on its price tag. But the data is looking good. Just in the last seven years, as technology got cheaper, prices for offshore wind have dropped 75%, according to WindEurope.

Constant innovation is a strong card in the industry’s favour. “Offshore wind is having a very good momentum now,” says Ivan Pineda. “The vision of large clusters of wind farms, big power plants at sea, connected to many countries will benefit not only countries with coastal resources, but electricity will flow across the continent, all the way to landlocked countries. There is this natural ingenuity in the industry, from the manufacturing of very large components to the way we can deploy these projects.”