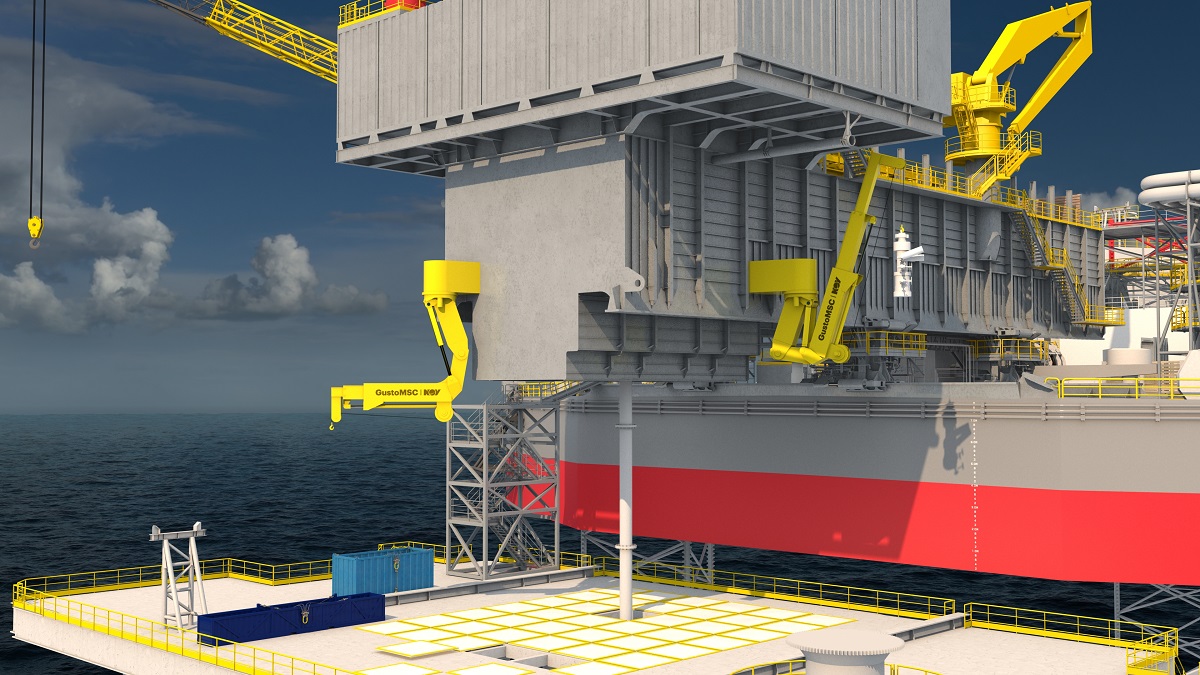 Understanding the needs for offshore operations leads to advanced technology

Velesto Drilling awarded GustoMSC the first two orders for the new and cost-competitive version of the Chela crane — the Chela Twins. Two cranes are to be installed on NAGA-6, a GustoMSC CJ46 drilling jack-up design and owned by Malaysia’s Velesto Energy. The GustoMSC Chela series is designed to improve safe handling underneath the cantilever and reduce total time spent on wells.

The GustoMSC Chela series of multifunctional arms offers an extra hand in operations. Due to its crablike motion characteristics, it can reach below the cantilever as well as reach towards the main deck, providing crane access to an area traditionally blocked by the cantilever when drilling. Chela thus provides a huge advantage in development drilling, infill drilling, and plug and abandonment operations. As an option wireline operations can take place offline, on any other nearby well, while the derrick is engaged with other well construction operations. The primary field-proven feature of Chela relates to safe and efficient lifting of well related parts and tools prior before and after well construction. With this functionality, a simultaneous operation with the activities performed by the drilling crew at well center is possible. Depending on the well-program, total time saved varies between 5 to 15% of total rig days per well. This proven technology represents a robust opportunity to bring forward ROI for every well drilled. With less rig days per well, it directly reduces the industry’s environmental footprint per well drilled.

In 2019, the first Chela crane was delivered to Maersk Drilling and installed onboard the Maersk Invincible – an ultra-harsh environment GustoMSC CJ70 drilling jack-up design. It has proven its claims since while operating offshore in the Valhall field for AkerBP. The Chela Twins take the key elements of this first Chela towards the South East Asian drilling arena. These Chela Twins cranes work around the well center in pairs. With their telescopic arms, they provide significant coverage below the cantilever and, depending on the cantilever position, can reach main deck and pick up tools or a x-mas trees, for example. The current offering of two telescopic cranes forms a cost-competitive solution that can be applied to the worldwide fleet of standard drilling jack-ups.

Based in Malaysia, Velesto Drilling Sdn Bhd is a wholly-owned subsidiary of Velesto Energy Berhad and is principally involved in the provision of offshore drilling services to the upstream oil and gas sector.
“We are grateful that Velesto Drilling is putting its trust in GustoMSC as rig designer and equipment supplier, and shows how our knowhow and overall understanding of our clients’ offshore operations lead to advanced technology. Working together with Velesto Drilling on this rig update project allows us to get closer to that ultimate and mutual goal: the highest level of safety, efficiency and sustainability at sea.” says Rutger Baan, Commercial Director GustoMSC.

GustoMSC commenced fabrication of the Chela Twins earlier last month. Since the project schedule is part of into a planned rig mobilization in the first half of 2022, the engineering and fabrication process started the day after the contract was signed. By using the latest simulation techniques and utilizing the knowhow gained during the first Chela crane in 2019, the delivery schedule targeted by the client can be achieved.