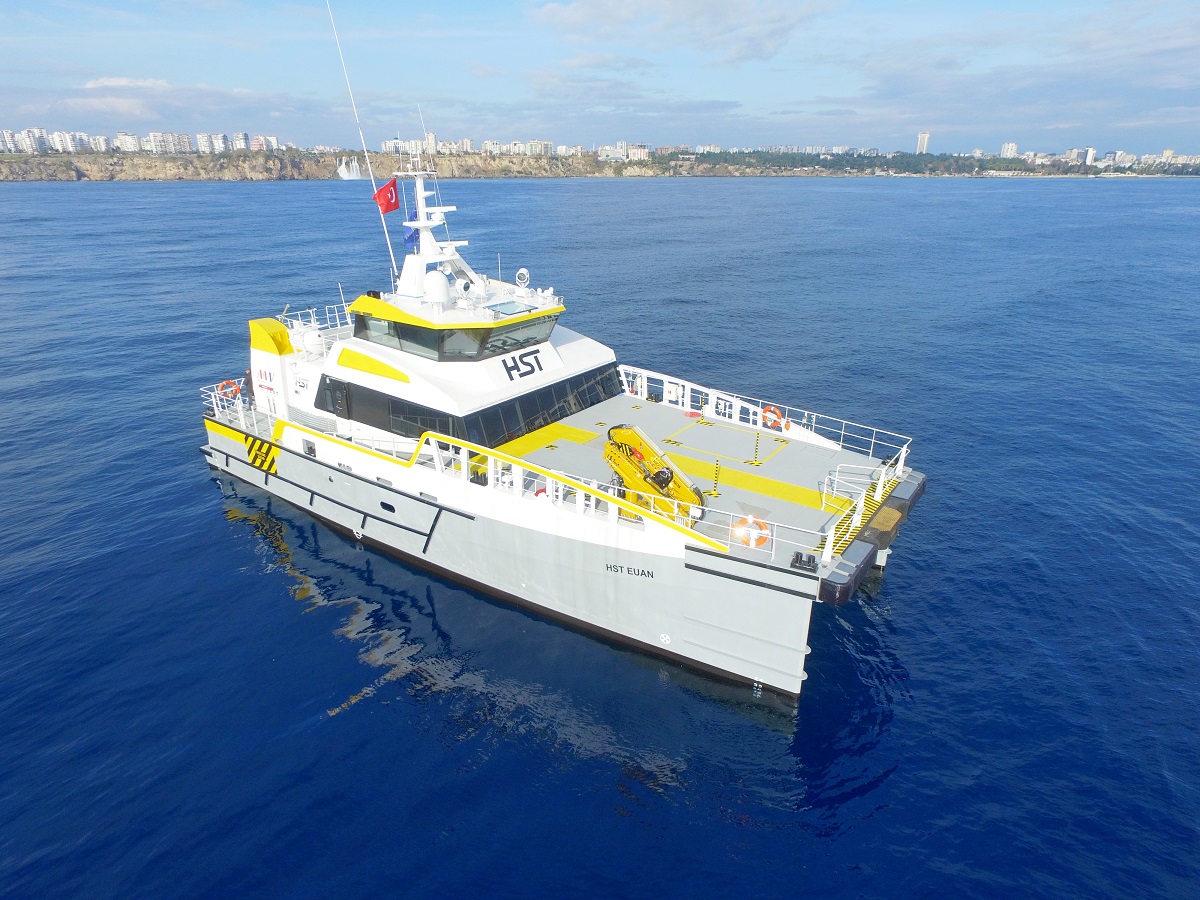 The UK-based High Speed Transfers (HST) Ltd has taken delivery of its fourth Fast Crew Supplier (FCS) 2710. This has occurred just over 18 months since it received its first, the HST Hudson, in June 2018, which was followed by HST Sofia in March 2019 and HST Harri in October of the same year. The latest addition is named HST Euan and in mid-January 2020 she was loaded on to a heavy lift vessel at Damen Shipyards Antalya in Turkey bound for Rotterdam.

The HST Euan replicates the features and layout of her sister ships. These include capacity for 26 passengers in safety and comfort and the ability to operate in wave heights of more than two metres. Other advances on the predecessor to the FCS 2710, the FCS 2610, include more flexibility, more tank capacity and greater deck space.

The new addition to the HST fleet has already been signed up for a five-year contract with leading wind farm operator MHI Vestas. Early next month she will join HST Harri in transporting personnel and equipment between Ostend and the company’s various sites in the North Sea.

HST’s fleet of FCS 2710 vessels has and continues to be kept busy, with all of them fully occupied over what is for many crew transfer vessel operators the quiet winter season. As stated HST Harri has been with working for MHI Vestas along with HST Sofia filling in for HST Euan pending its arrival, and HST Hudson has recently completed a contract with Boskalis on the East Anglia One windfarm in the southern North Sea and is now beginning a new assignment on a Dutch project.

Full speed ahead
Despite its rapid growth, HST is not slowing the pace. “2019 was very much a year of growth,” says Tom Nevin, CEO of HST, “and we are carrying that momentum forward into 2020. We are in discussions with Damen regarding not only additional crew transfer vessels but also multi-purpose vessels such as Multi Cats. This would be a degree of diversification for us, opening up activities such as cable laying and maintenance, trench support and marine civil engineering using the larger, DP2 Multi Cats for maximum versatility. This would allow us to offer a broader range of services to our clients.”

The company is also supporting the Damen FCS 2610 and 2710 newbuilds in Taiwan for Hung Hua Construction with crew training in Europe and sea trials out on location. “Generally, we are looking to refine our service offerings and look more towards sustainable shipping,” concludes Tom Nevin.”

“We are very proud to be working with HST, which has deservedly made a name for itself through the quality and flexibility of its services,” says Damen UK sales manager Frederik van der Linde. “The HST team is also setting new standards in the offshore renewables industry amongst others with their vision for a sustainable future. We value our partnership with them and look forward to continuing this for many years to come.”