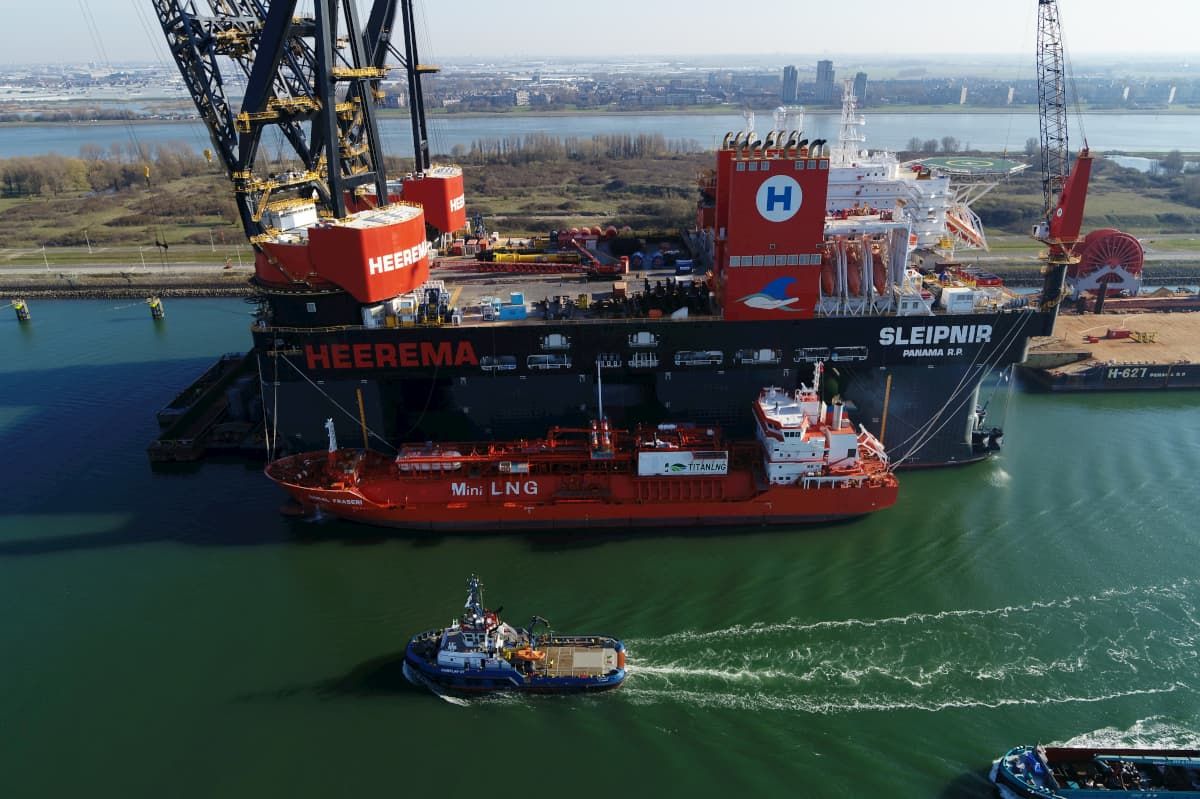 THIS IS A JOINT PRESS RELEASE

Heerema’s Sleipnir, the world’s most powerful semi-submersible crane vessel yesterday, received the largest LNG bunkering ever completed. Titan LNG organized the bunkering, using Coral Fraseri, Anthony Veder’s LNG carrier in the Port of Rotterdam. A collaboration of four Dutch companies who have united to make history for sustainability in The Netherlands.

Sleipnir arrived at the Port of Rotterdam on Sunday, March 22. The vessel came home for the first time following a successful global campaign. The vessel has a wide range of sustainable measures, including being fully outfitted with LED-lighting alongside a hot/cold energy recovery system besides its ability to run on LNG. The use of LNG considerably reduces harmful local emissions and emits less CO2 than other commonly used fuels.

The total amount of LNG delivered was almost 3,300 metric tons, making this the largest LNG bunkering to have ever taken place. The history-making delivery took less then twenty-four hours to reach completion.

Heerema’s CEO, Koos-Jan van Brouwershaven, emphasized that ‘Heerema is proud to have received the world’s largest LNG bunkering. We are especially pleased that this achievement could take place in our home base of Port of Rotterdam. The use of LNG on Sleipnir is one of many sustainability measures we have introduced, and we will continue to investigate ways to reduce our impact on the planet.’

Michael Schaap, Titan LNG’s Commercial Director, explained that the bunkering was becoming a routine operation for the Dutch companies involved because of the excellent cooperation between all parties: ‘We formed and executed a plan of action smoothly and safely. Organizing such a massive operation requires thorough preparation, but it is all worthwhile, making the world a little greener.
Sleipnir demonstrates that it is financially possible to sail on LNG, even in remote parts of the world. As Titan LNG, we are proud to supply the vessel with LNG for the sixth time. However, as this delivery is at home, it was particularly special.’

Jan Valkier, CEO of Anthony Veder says: ‘By investing in dedicated LNG vessels since 2009, we have made an essential contribution to the availability of LNG for the power generation and LNG as a marine fuel. We are therefore proud of this Dutch cooperation in our home port Rotterdam, where we carried out the largest LNG bunker operation with Coral Fraseri. An important step for Rotterdam as an LNG bunker hub.’

It is essential to note that all companies involved followed the strict government guidelines to protect their workforces during the ongoing COVID-19 outbreak.