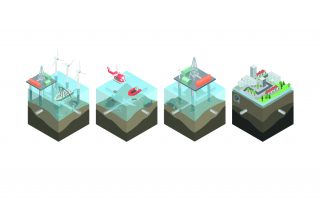 Examples include the electrification of oil and gas platforms, the use and reuse of gas infrastructure for the transport of wind energy in the form of hydrogen, and the reuse of empty gas fields for the subsurface storage of CO2.

“This requires a smart coupling between offshore wind parks and the present oil and gas infrastructure. Offshore production platforms consume some of the gas produced to supply the power used on the platform. If the top 10 gas-consuming platforms were to be connected to the offshore electricity grid, this could deliver a net saving of roughly 500,000 metric tons of CO₂ per year.”

According to the Dutch initiative, the first decisions to get such systems operational will be required in the very near future not only to attain the climate objectives, but also bearing in mind the rapidly approaching decommissioning of oil and gas infrastructure in the North Sea.

The North Sea Energy programme has also proposed several initiatives to accelerate the creation of synergies between the two industries. The initiatives include an extra market incentive to trigger CO2 savings, drafting of a shared vision and joint action plan for offshore system integration in relation to the energy transition in the North Sea, and a regulatory framework to be put in place in good time, so that it does not become a barrier that delays the implementation of system integration options.

The North Sea Energy programme was launched in May 2017 to accelerate the energy transition in the North Sea. This programme is supported by the Topsector Energy and has about twenty participants from trade and industry, sector organisations, research institutions and civil society organisations (NGOs). The program is intended to have a term of several years, and currently has funding in excess of EUR 1.5 million.