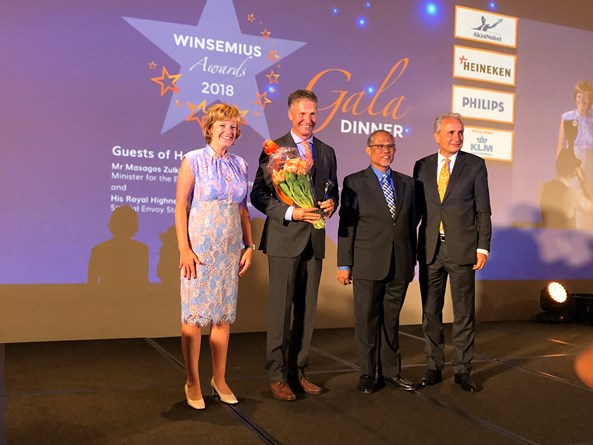 TrustLube provides a solution for a dirty, dull, dangerous but also critical part in the maintenance of heavy-duty machines in marine and offshore. TrustLube develops customized lubrication systems. As a result, the machines have longer life expectancy, the system makes the job safer and easier and uses less product so prevents access product to spill into the environment. By using local suppliers TrustLube looks to further expands and builds their foothold in Singapore.”

On the 17th of May 2018 DutchCham organized their yearly Gala Dinner at the Grand Hyatt in Singapore, in celebration of the close partnerships between Dutch and Singaporean businesses and institutions. The Awards aim to recognize the achievements of businesses and institutions in areas associated with Dutch business culture and sector excellence in Singapore, using both Dutch and/or Singaporean resources. This year’s theme was Technological Innovation.

Together with the Ambassador of the Kingdom of The Netherlands, HE Mrs Margriet Vonno, ADB-DutchCham was honoured and privileged that His Royal Highness Prince Constantijn of the Netherlands was the guest of honour, together with Minister S. Iswaran, Minister for Trade and Industry of the Government of Singapore. ADB-DutchCham also welcomed distinguished guests, including government representatives, CEOs and managing directors of Dutch and Singaporean companies, as well as the diplomatic circle.