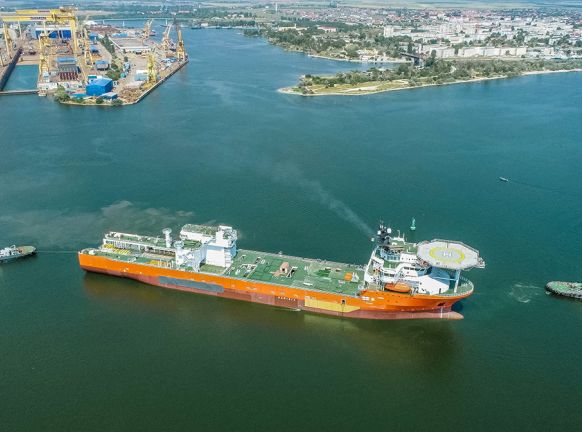 The 177-meter vessel “AMV 3” is the largest and most complex diamond recovery vessel in the world. The ship was built by Damen at its shipyard in Mangalia, Romania. It was delivered there after a trial run. The AMV3 is currently in Cape Town, South Africa, where the diamond recovery equipment will be installed.

Supply and integration of electrical package
Bakker Sliedrecht was responsible for the entire electrical system integration of the ship within the new construction project. It engineered all electrical installations from the drawing board. From the electrical propulsion via diesel generators to the switchboards, from the high voltage to low voltage distribution network to the integration of complex systems such as the Dynamic Positioning (DP2) system, powered by seven thrusters and six generators. In addition, Bakker Sliedrecht supplied over 150 meters of switchboards for low voltage on board.

Special collaboration project engineering
The collaboration between builder and system integrator was special in several respects. During the engineering of the ship, teams from Damen and Bakker Sliedrecht worked closely together, even in each other’s offices. “We cooperated openly and transparently. That has worked well for both party’s and ultimately contributed to higher quality, more efficiency and cost-effectiveness,” says project manager Fred Hordijk of Bakker Sliedrecht. Bakker Sliedrecht will soon travel to Cape Town to commission a few switchboards on site and to resolve some minor residual issues. After that, a trial run with the diamond recovery vessel will be made.

Challenges during Covid-19 pandemic
“The project has recently been successfully completed, but there have certainly been challenges. For example, we have built and supplied quite a number of switchboards in a very short time, under difficult circumstances, in the middle of the pandemic. That made it very special,” says Hordijk. “By being flexible and by completing the switchboards later on site, the construction of the ship did not have to stagnate and Damen was able to deliver the AMV3 on time.”