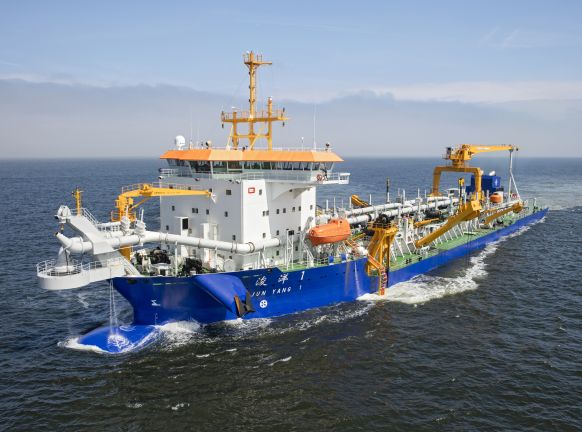 Bakker Sliedrecht will supply its innovative condition monitoring system for measuring vibration of bearings in submersible motors to trailing suction hopper dredger Jun Yang 1, the largest trailing suction hopper dredger in China at the moment. Condition monitoring is a way to improve the preventive maintenance of the motor. Analysing deviations makes it possible to plan maintenance better and early action can be taken in case of malfunctions.

The Dutch system integrator has signed a contract with CCCC Guangzhou Dredging Company (GDC) for the project. The condition monitoring system is engineered in Sliedrecht and installed on site by sister company Bakker Zhangzhou.

Prevent or limit downtime
The vessel can operate at great depths under severe conditions by the submersible pumps on the suction tube, which are equipped with oil-filled low-speed submersible motors, supplied by Bakker Sliedrecht. The system integrator from Sliedrecht has developed the system to measure the vibrations of the bearings in the motors. Bakker will install new sensors for this purpose that measure the bearings in order to collect and store data. That data is analysed through algorithms, so potential problems and deviations in behaviour or condition are immediately visible. “If you see something deteriorating in the motor or the bearings, you can intervene immediately to avoid damage. In addition, this system makes maintenance more plannable and predictive,” say technology manager Arend van der Velde and account manager Wim Verlek of Bakker Sliedrecht. “Without the submersible motors, the ship cannot do its job, so if the bearings have to be replaced, the ship will be out of service. That costs a lot of money. This downtime can be prevented or limited with this system.”

Real time status dashboard
Bakker Sliedrecht collects and analyses all data and sends GDC semi-annual reports on the general condition of the motor. In addition, a dashboard will be installed on board showing the status of the motors. The dashboard also sounds the alarm when the system detects an error.

Further development of technology
Except for measuring vibrations in the bearings, the technique is further developed within the internal innovation program. By expanding the system with more sensors, it can collect and analyse data about the temperature in the engines, the oil pressure or the engine power. The drive supplied by Bakker Sliedrecht and the frequency inverter of the submersible motors can also be monitored. “Our goal is to eventually integrate the entire electric train into the system, so that we can intervene early anywhere,” Van der Velde and Verlek say. “Due to the current global market developments, you can see that the movement towards predictive maintenance is accelerating. Bakker responds to this with new maintenance concepts and condition monitoring.”

The monitoring system can either be added to existing submersible motors or supplied as standard with new motors.