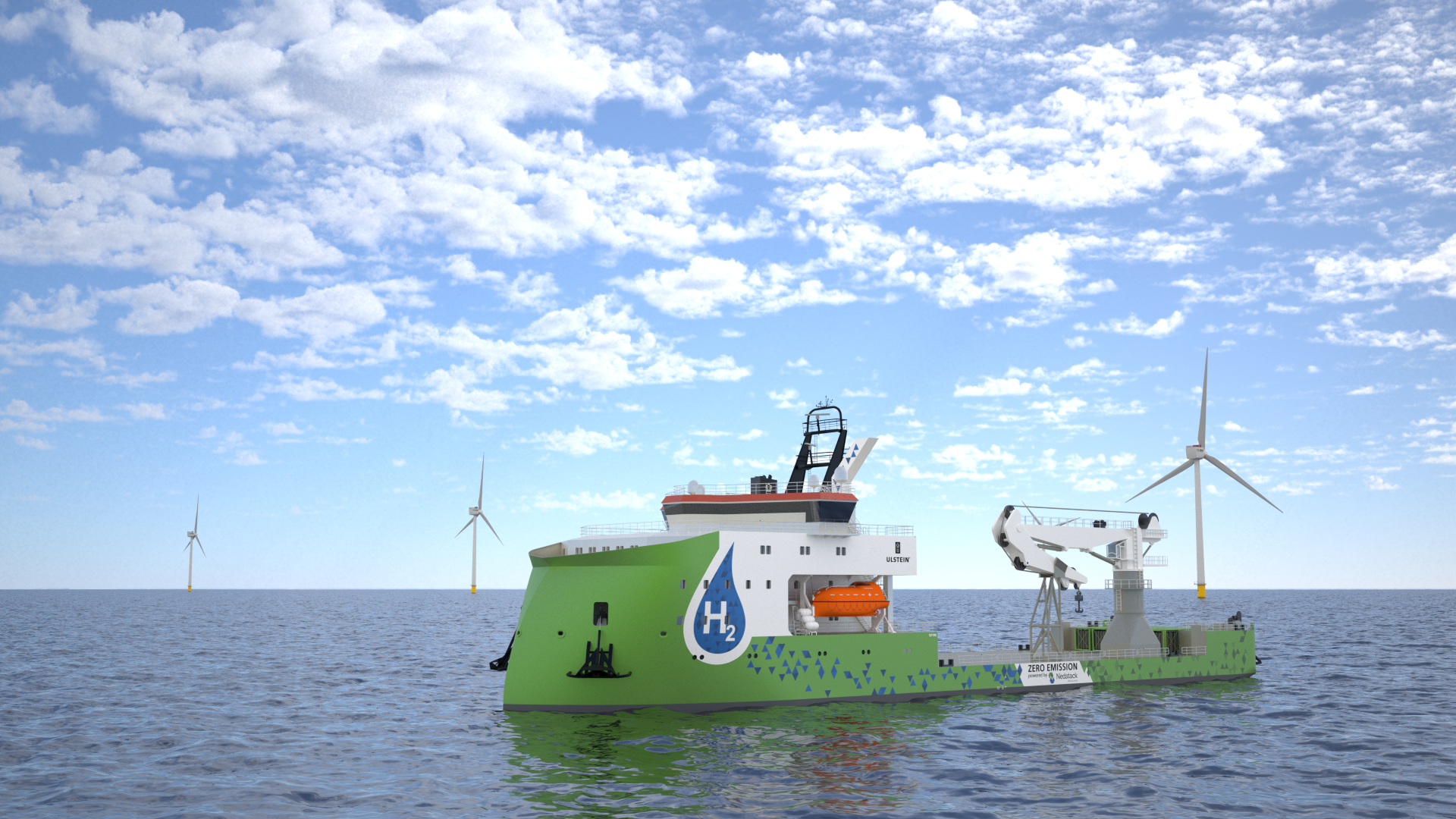 ‘We support the recent hydrogen initiatives by ports and large industry players. It strengthens us in our ambitions to be at the forefront of sustainable ship designs. A vision like this can be turned into reality through innovation and industrialisation, but here we will need a partnership between research institutions, governments, regulators and businesses. Our SX190 zero emission design only marks the start of our roadmap towards future zero-emission operations of long endurance,” says Tore Ulstein, deputy CEO, Ulstein Group

The ULSTEIN SX190 design uses proven and readily available hydrogen technology, enabling clean shipping operations to reduce the environmental footprint of offshore (renewables) projects. CO2, NOX and particle emissions are completely eliminated when using hydrogen fuel cells for on board power generation. However, today’s technology and (especially) hydrogen infrastructure only allow operations of up to approx. 5 days in zero-emission mode. But it is just the first step towards a hydrogen marine economy, as an endurance of multiple weeks is required for hydrogen to support full zero-emission marine operations.

Hydrogen challenges
The PEM fuel cell systems adopted for the SX190 design have already been built and proven in the multi-megawatt power ranges and meet the requirements of the marine industry. For the successful use of hydrogen fuel cells as zero-emission power system on board, the following four aspects are key in paving the way to a cleaner future:
1) Regulations – development and acceptance of regulations for bunkering and hydrogen power systems
2) Infrastructure – development of suitable transport, bunkering and storage technology
3) Green hydrogen – large scale production of hydrogen from sustainable energy sources
4) Cost – willingness to cover initial extra cost for hydrogen fuel and technology

Ulstein, as ship designers, can contribute in providing solutions for the onboard hydrogen lay-out to match the developments in regulations, shoreside infrastructure and green hydrogen. Early adopters are often ‘punished’ by higher costs, but choosing an adaptable zero emission solution, allow those companies to fulfil their environmental ambitions, be ahead of the game and will provide them value throughout the energy transition.

Containerised solution
Hydrogen bunker facilities are currently not yet available, so for the ULSTEIN SX190 design the designers chose a flexible containerized gas storage system on the aft deck.
The current capacity of this storage system limits the range to 4-5 days in zero-emission DP mode, but it allows the vessel to be independent of H2 bunkering infrastructure. The hydrogen gas can be refilled by trucks at the quayside, or the storage containers can be lifted of the vessel and transported to a hydrogen plant, if refilling in port is not allowed by port authorities.
This readily available solution bridges the gap towards future hydrogen regulations and infrastructure.

Of course, the hydrogen can also be used solely when entering or being in port, reducing local emissions in congested areas.

To enhance the zero-emission range of the ULSTEIN SX190 the first step would be swapping the gas storage containers by liquid hydrogen storage containers. Cryogenic liquid hydrogen triples the amount of hydrogen per volume from compressed hydrogen gas. These containers will become commercially available the coming years and would take the range already to two weeks, without any modifications to the vessel and maintaining the bunker flexibility of a containerised storage system.

And although this cryogenic storage technology is already available now (as it is quite similar to LNG storage technology), including these type of liquid hydrogen tanks only makes sense when port bunker facilities are available. But when this step is taken, the hydrogen fuelled, zero emission endurance will increase to a month. And as the containerised hydrogen storage tanks on deck will then be obsolete, the full work deck area becomes available again.

Just very recently, various ports revealed their intentions to invest in the hydrogen economy, including the ports of Zeebrugge and the Port of Rotterdam. The latter announced the development of a hydrogen backbone to connect green hydrogen production with consumers in 2025. When liquid hydrogen bunker facilities become readily available on a worldwide scale, a vessel solely powered by hydrogen can be realised. For now, the operational flexibility of the hydrogen storage and dual fuel solutions in the ULSTEIN SX190 will be a necessity in the coming decades of transition towards a hydrogen economy. 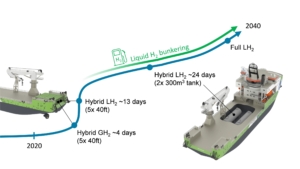