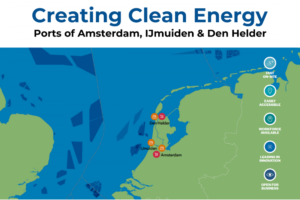 The newly installed Dutch government has started with an ambitious coalition agreement. In the existing roadmap 2023-2030, 11.5 GW Offshore Wind is planned. Recently an additional 10 GW for 2030 was announced. On top of this, the new coalition agreement, stated an extra ambition of 6 GW until 2030. Therefore a total of 27.5 GW by 2030 is planned. Most of these wind farms will be located off the coast of North Holland, where we fully embrace these new opportunities and together work on capitalizing them.

During our webinar we will reflect on the enormous ambitions and hear the vision and requirements of wind farm developers in fulfilling the challenges ahead. We realize that the tasks ahead of us can only be successfully resolved by close cooperation and involvement of the Ports of Amsterdam, IJmuiden and Den Helder, including Den Helder Airport. We will therefore demonstrate in this webinar our joined willingness and commitment to provide optimal support to the future wind farms on the North Sea.

The webinar will be opened by Giles Dickson, Chairman of Wind Europe. Followed directly by Ruud de Bruijne of RVO (Netherlands Enterprise Agency). He will explain the exact plans for 2030 and how the Hollandse Kust West tender process will be continued. Mrs Zita Pels, Vice Governor in charge of the North Sea Canal Area & Seaports, Province North Holland, and Mr Edward Stigter, Vice Governor Climate and Energy, will elaborate on the provincial response to the opportunities offered. How do they view the enormous potential of the Offshore Wind developments. Their initiatives facilitate and support numerous activities to optimally position the North Holland province in this field. The three Seaports (Amsterdam, IJmuiden and Den Helder) of Noord Holland and Den Helder Airport will reflect on these statements and the developments of our province.

Our final guest is a successful entrepreneur who plays an essential role in wind farm logistics and makes use all offered facilities in the North Holland Port area. His company transitioned from a service provider to the traditional fossil industry into a service provider to the renewable energy sector, which now is a significant percentage of his companies’ portfolio.

The webinar will be chaired by Sylvia Boer and Pim Visser, directors of the regional associations AYOP (Amsterdam IJmuiden Offshore Ports) and NSEG (North Sea Energy Gateway).
Together they will, in just one and a half hour, moderate the session and draft a clear picture of the future market, discuss relevant expectations and explain how we can meet and support each other in North Holland.

Registration via this link.