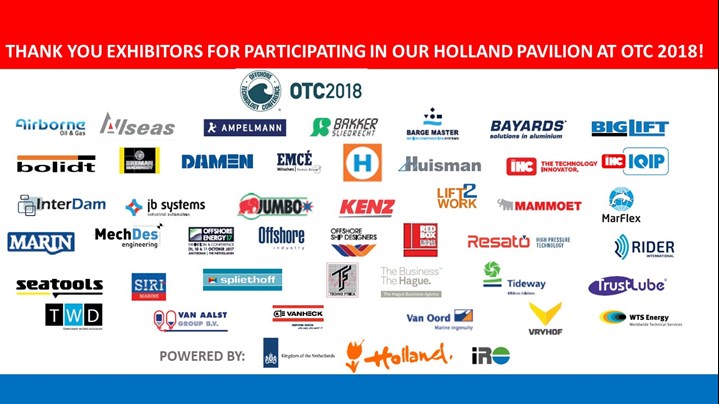 From 30 April to 3 May, 2018, more than 61,300 attendees from more than 100 countries gathered at the annual conference and exhibition Offshore Technology Conference (OTC) in Houston, USA. Although the number of visitors was slightly less than 2017’s edition, the quality level of the visitors at the Holland Pavilion was better. Lot of good conversations took place at the several Dutch stands. Overall OTC 2018 was well received by both exhibitors as well as visitors.

The OTC is traditionally considered as the prime annual event where Energy Professionals from all over the world meet to exchange knowledge and share ideas and opinions. This year the conference reaches a milestone in her existence, celebrating 50 years!

The first OTC was held in 1969, in Houston at the same spot as today, and turned out to be very successful. This was beyond expectations. Started with 2,797 attendees and 368 exhibit spaces, the conference grew significantly with 61,300 attendees and 2,300 exhibitors in 2018.

IRO also reached a milestone this year: the 40th participation at OTC! Since 1978 IRO was present with its Holland Pavilion.
Traditionally IRO has one of the largest pavilions, representing an impressive range of Dutch pride companies. The nearly 45 exhibitors in the 1000 square meter Holland Pavilion represented a wide range of offshore products and services, varying from shipbuilding to offshore engineering.
They were all presented in the special OTC 2018 edition of the magazine Offshore Holland.

A night at the museum

The Holland Network Reception in the Museum of Fine Arts Houston on Monday evening 30 April, was well attended. More than 325 guests gave an acte de presence. The guest list comprised of a good representation of guests from the Netherlands, the Dutch Embassies in Washington and Mexico City, the Consulate and NBSO in Houston, as well as many guests from international institutions such as embassies, government representations and global oil & gas companies. In addition to networking, our guests could also enjoy the art in the museum.

The organisers and participants of the Holland Pavilion wish to thank all contributors and the entire Dutch delegation for making this year’s OTC a success again!