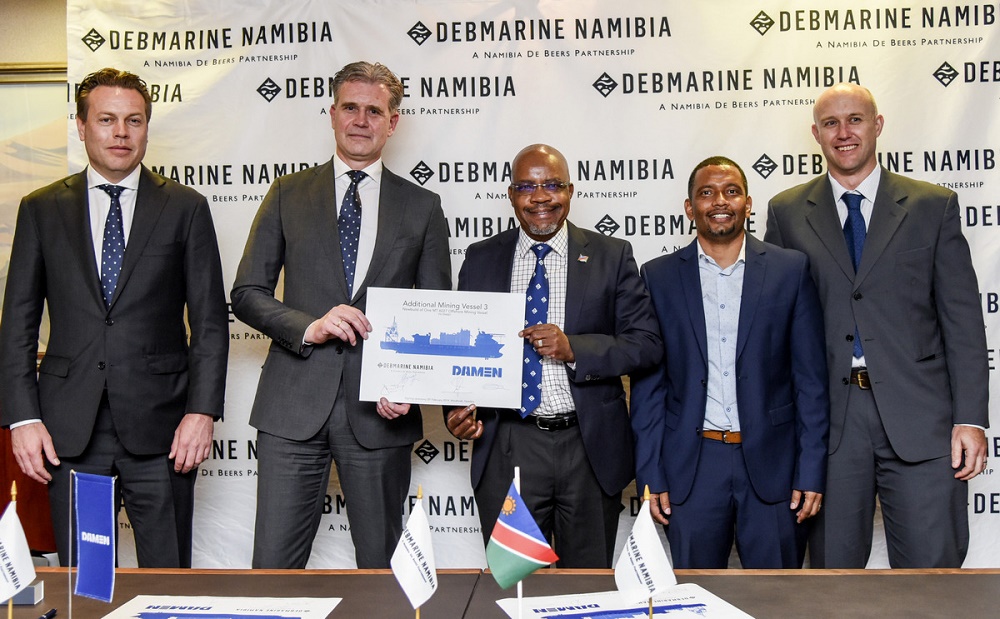 At 177 metres (577 feet) long, the new vessel will be slightly larger than the current largest vessel in the De Beers Marine Namibia fleet, Mafuta (174 metres, 571 feet). Constructed from a Marin Teknikk design, the MT 6027 will be the most technologically advanced marine diamond recovery vessel in the world. On-board features include a dynamic positioning system (DP2) based on a seven-thruster propulsion system powered by six generators of 3230 eKW each.

This is the first time Damen has interacted with De Beers Marine Namibia as clients, and the new opportunity is one of several generated by Damen’s shipyard in Mangalia, Romania. The Mangalia yard has the largest capacity of all Damen’s yards, with a total of three graven drydocks up to 60 metres in width and 1.6 km total berthing space. The larger capacity has allowed Damen to take on larger construction projects, such as a RoRo ferry measuring 148 metres in length, a 155 metre long Cruise vessel, and this new 177 metre offshore mining vessel for De Beers.

Damen sales director offshore, Ruud van der Stroom, is thrilled at the opportunity for Damen to apply its expertise at this greater scale. “So far, Damen’s newbuild focus has mainly been on standardisation and in-house or own design vessels, along with various types of support and service vessels built for the offshore market,” he said. “However, the facilities in Mangalia allow us to respond positively to De Beers Marine Namibia’s newbuild enquiry: an engineered-to-order project with vessel dimensions beyond that built by Damen ever before.”

After an intensive and very constructive tender process, Damen was able to secure the contract with De Beers Marine Namibia in early 2019 and has since been working on design completion and on preparation of the Mangalia yard for the vessel’s construction. In terms of progress, Mr van der Stroom adds, “This week we reached a first milestone: steel cutting. We are looking forward to the construction of this vessel, a challenging project I’m convinced Damen, with its extensive expertise and knowledgeable personnel, will successfully deliver on time.”

De Beers Marine Namibia operates the largest offshore mine in the world, working at a water depth of between 90 and 150 metres off the south west coast of Namibia. The company owns five mining vessels and a dedicated sampling vessel, and additionally charters one sampling/mining vessel. Michael Curtis, head of the Addition Mining Vessel 3 Project for De Beers Marine, sees the new vessel order as a harbinger for potential future collaboration. “We were already well aware of Damen’s reputation as a reliable, efficient shipbuilder,” says Mr Curtis, “and we are pleased to contract Damen to build this vessel for us after successfully winning a Global Tender for the construction of the vessel. De Beers Marine (South Africa) will construct the mission equipment, comprising a subsea crawler and diamond recovery plant, in South Africa in parallel to the vessel construction. Once the vessel is delivered by Damen, it will be sailed to South Africa where the mission equipment will be integrated into the vessel by De Beers Marine. Given the parallel path and complexity of the project, it is critical to work with the best shipbuilders who have a reputation for performance and on-time delivery.”

The steel cutting ceremony marks the beginning of construction on the vessel, which will take around two years to build. Damen Shipyards Mangalia will deliver the vessel platform in Mangalia and the vessel will sail on its own keel to Cape Town, South Africa. After the integration of the mission equipment in Cape Town, the vessel is expected to deliver first diamond production in Q2 2022.