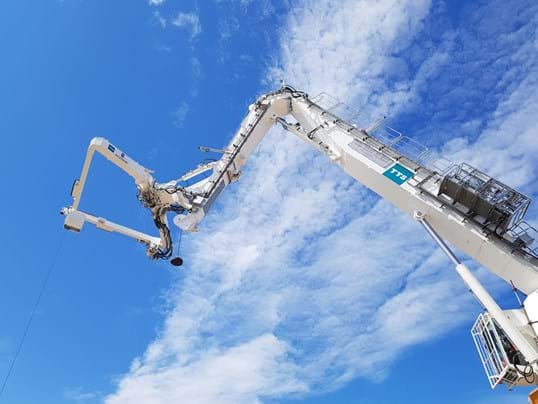 13 months have passed since TTS and Ulstein announced their partnership on bringing the Colibri motion compensation system to market, and the first unit has now passed its FAT with Class and Owner present. “Seeing that the Colibri is functioning just as simulated in the HIL test is quite astonishing”, says Nick Wessels, Marketing Manager at Ulstein. “Our engineers and the project team deserve a huge compliment for this great achievement, as they turned their vision into amazing reality”.

“The revolutionary anti-sway feature, that eliminates load sway and also compensates for external forces such as wind gusts, will greatly increase the operability for offshore load handling,” says Carl Herland, Sales Manager at TTS. He adds, “Furthermore, the Colibri is also approved for personnel lift with a basket, able to work as a secondary means of personnel transfer between turbines and the ship, adding an additional layer of redundancy to walk to work systems”.

The crane is now being shipped to Cemre Shipyard in Turkey, for installation on board Louis Dreyfus Armateurs new vessel “Wind of Change”, due to go into service with Ørsted in the near future.