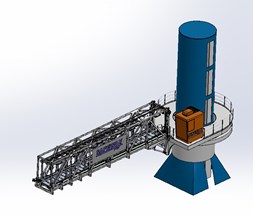 With its balanced design, the ‘Safeway Seagull’ surprised the market with its excellent field performance. The ‘Osprey’ is designed for maximum integration in SOV-type vessels. The main aim of the new ‘Albatross’ design is to offer increased flexibility to shipping lines and operators.

The most unique feature of the ‘Safeway Albatross’ is that a lift is integrated in the mast of the installation for the transport of goods, pallets and people. As an option, the lift can be extended to the below-deck storage hold of a Platform Supply Vessel (PSV).

According to Safeway, part of the Van Aalst Group, the stable boom of the new ‘Safeway Albatross’ can be rotated through 360 degrees, offering significant advantages. One advantage of this feature is that the mast can be mounted centrally on the deck of a PSV. It also means that the 30 metre-long gangway can be manoeuvred towards the stern, port or starboard, for the safe transfer of workers and their tools from the vessel to the offshore construction, at a spectacular pace. Thanks to the 30 metre length of the boom, the gangway can be positioned centrally on vessels with a maximum beam of 20 metres. A centreline position is the optimum position because ship movements at this point are kept to a minimum. The increased boom length also means less movement of the gangway, so that transfer operations can be carried out even more safely.

Safeway has announced that it is possible to supply an optional variant with a boom length of up to 32 metres. This gangway can be mounted on vessels with a width of 24 metres, enabling ship operators to deploy even more vessels from their fleet for identical activities.

The above described patent pending construction means that the ‘Safeway Albatross’ offers a degree of flexibility never previously seen in the international gangway industry.

Since the Seagull-type gangway was introduced, its cargo function has proven to be second to none, in practice. The presence of a smart Safeway A-Frame construction enables the ‘Seagull’ to achieve a lifting height that cannot be matched by other solutions available on the market. Another important advantage of the Safeway A-Frame is that at the touch of a button, the operator can switch in just 20 seconds from People Transfer Mode to Cargo Transfer Mode. Practice has shown that this 3D crane function is used far more often than was initially expected. In this sense, too, Safeway has once again raised the performance bar. As well as a lifting capacity of 1000 kg, a variant can be supplied as an option with a lifting capacity of up to a spectacular 2500 kg. As a result, it is possible to adapt the planning of offshore operations so that work can be completed faster, more efficiently and more safely. This places Safeway at a considerable advantage in respect of the established order among gangway builders.

“What was unreachable before has now become the new benchmark,” said Wijnand van Aalst, Managing Director at Safeway. “We at Safeway are not focused on what others are doing, but on being the best at what we do.”

Another unique feature is that the standard covered gangway offers height adjustment of 18 metres. Including the upward and downward luffing capacity, this results in a vertical reach of 10 metres, without the need for any alterations to the pedestal. As a consequence, the lift can be halted at three different heights, to allow direct access for passengers to the offshore structure, be it an oil and gas production platform, or a wind turbine. To achieve even higher transfer speeds, an option has been included to create ‘continuous access’. This generates huge time savings, particularly when it comes to transferring large groups of people in a short period.

Wijnand van Aalst continued: “Over the past 11 months, our ‘Seagull’ gangway has undeniably demonstrated its ability to outperform others in the offshore oil and gas industry and in windfarm projects, during commissioning and maintenance campaigns. The ‘Safeway Seagull’  has been constantly used for the safe transfer of personnel and goods during offshore wind projects including Borkum West, Wikinger and Arkona. For the oil and gas industry, the ‘Seagull’ has also proven its value on the Tyra East gas field and the F3 offshore loading tower project.”

Remko de Boer, General Manager at Safeway B.V. added: “Our customers have benefited from Safeway’s unique features such as roll compensation, height adjustment, zero impact bumpering/hover and counterweight. In particular our zero impact bumpering feature has proven an absolute ‘game changer’. Normally speaking a force (of up to 1000 kg) is applied against an offshore platform or foundation pile, to ensure a secure connection. This imposes considerable demands on the platform or wind turbine, to avoid the risk of damage. Besides the fact that the gangway has to be locked into position, a great deal of time is lost for the initial positioning of the traditional gangway. To counter this difficulty, the special feature of Safeway gangways is that the tip of the motion compensating gangway can be suspended in a stationary position, in the air, so that there is no need for a fixing point. Again this represents a huge time saving. In principle, the operator of a Safeway type of gangway is free to select his approach to the mooring position to bring about the quick, safe and efficient transfer of employees and maintenance engineers.” 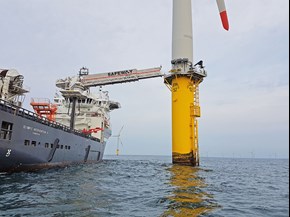 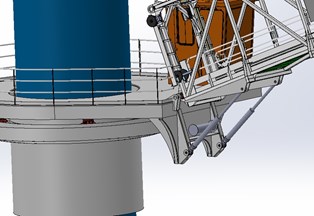