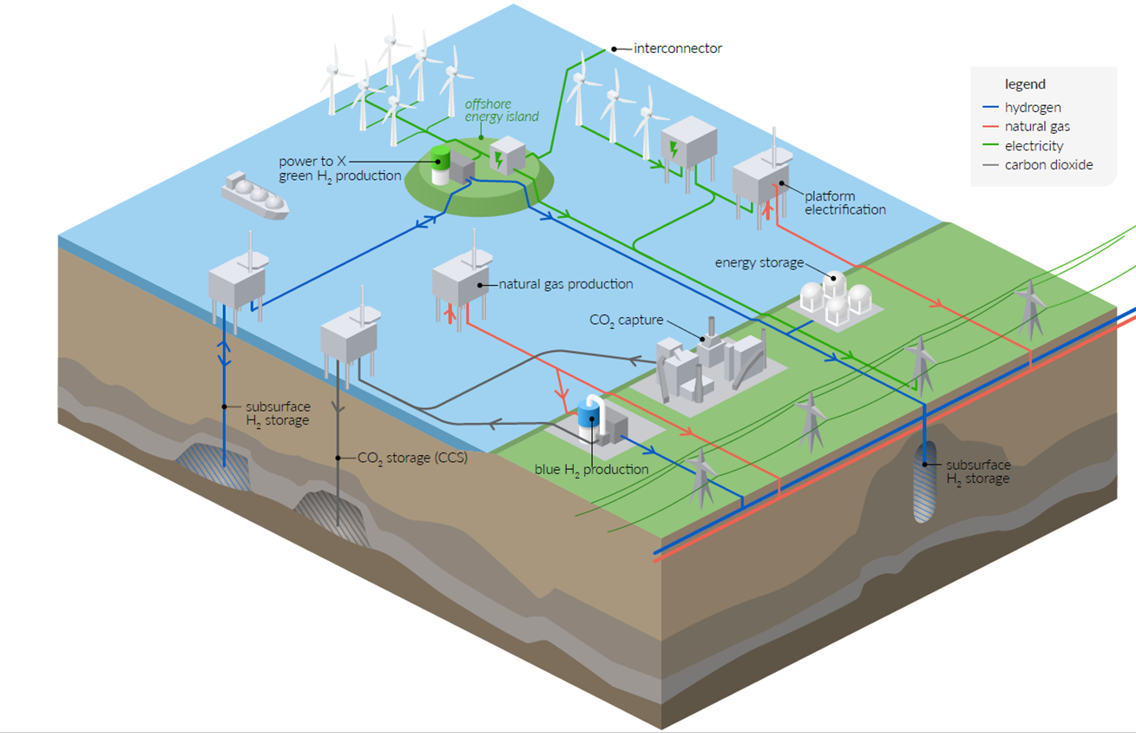 Increasingly large-scale wind energy generation, gas production that will continue for a long time, CO2 storage, hydrogen production, construction of energy hubs, reuse of platforms and pipelines: using the North Sea to achieve the climate targets is an enormously complex puzzle. But through intensive cooperation between many parties and the clever combination of activities, it can certainly be solved.

That is the essence of what the North Sea Energy program is all about. For several years, this partnership of more than thirty parties has been researching the possibilities of system integration on the North Sea and what the advantages are. If we work together and make choices in the short term, we can better exploit the synergy benefits. And that has advantages: together, we can reduce CO2 emissions more effectively and do so at a faster pace than now, reduce the costs involved, and we can use the scarce space we have more usefully. Because, in addition to the energy sector, there are other functions that have to fit in, such as fishing, shipping, defense, coastal protection and recreation. It also means making sometimes difficult choices in organizing all the present and future energy activities at sea.

“I prefer to talk about opportunities, without trivializing the dilemmas,” says TNO expert René Peters, who is closely involved in the public-private program. “Making smart combinations is paramount. The North Sea has tremendous potential as a source of sustainable energy for the Netherlands. We therefore need to think and act integrally in order to steer the considerable growth in wind energy in the coming period in the right direction. System integration here means strategically planning which infrastructure to keep and which to remove. What is useful can be cleverly deployed for new functions, such as the storage and transport of hydrogen produced at sea or the storage of CO2. That is why we’re proud of the first offshore green hydrogen production pilot on a working platform here off the coast of Scheveningen/The Hague. The pilot is called PosHYdon. Here on Neptune Energy’s Q13a-A platform we will integrate three working offshore energy systems: offshore wind, offshore gas and green hydrogen. The lessons learned here will help to take the next steps towards large scale green hydrogen production on the North Sea.”

A far-reaching example of system integration is the creation of offshore hubs, where various functions can come together: production of gas, hydrogen, wind energy, electrification, storage of hydrogen and CO2, transport to and from land.

René Peters: “We are investigating how we can shape such energy hubs. We are forming new value chains with the many parties involved. The  identified offshore areas will be linked to industrial clusters on the coast in and around the ports of Rotterdam, Amsterdam / IJmuiden, Den Helder and Eemshaven. Wind energy at sea is accelerating. The currently planned capacity of 11.5 gigawatts in 2030 will probably grow by an additional 6 to 9 GW. The wind farms are also being placed further out to sea. Because it is becoming increasingly complicated to fit these large amounts of wind energy into the system, we already have to make strategic choices for generation, conversion, transport and storage of various types of sustainable energy. These hubs will bring together the various energy functions so that we can elaborate in-depth scenarios based on techno-economics, ecology and environment, logistics, regulations and safety.