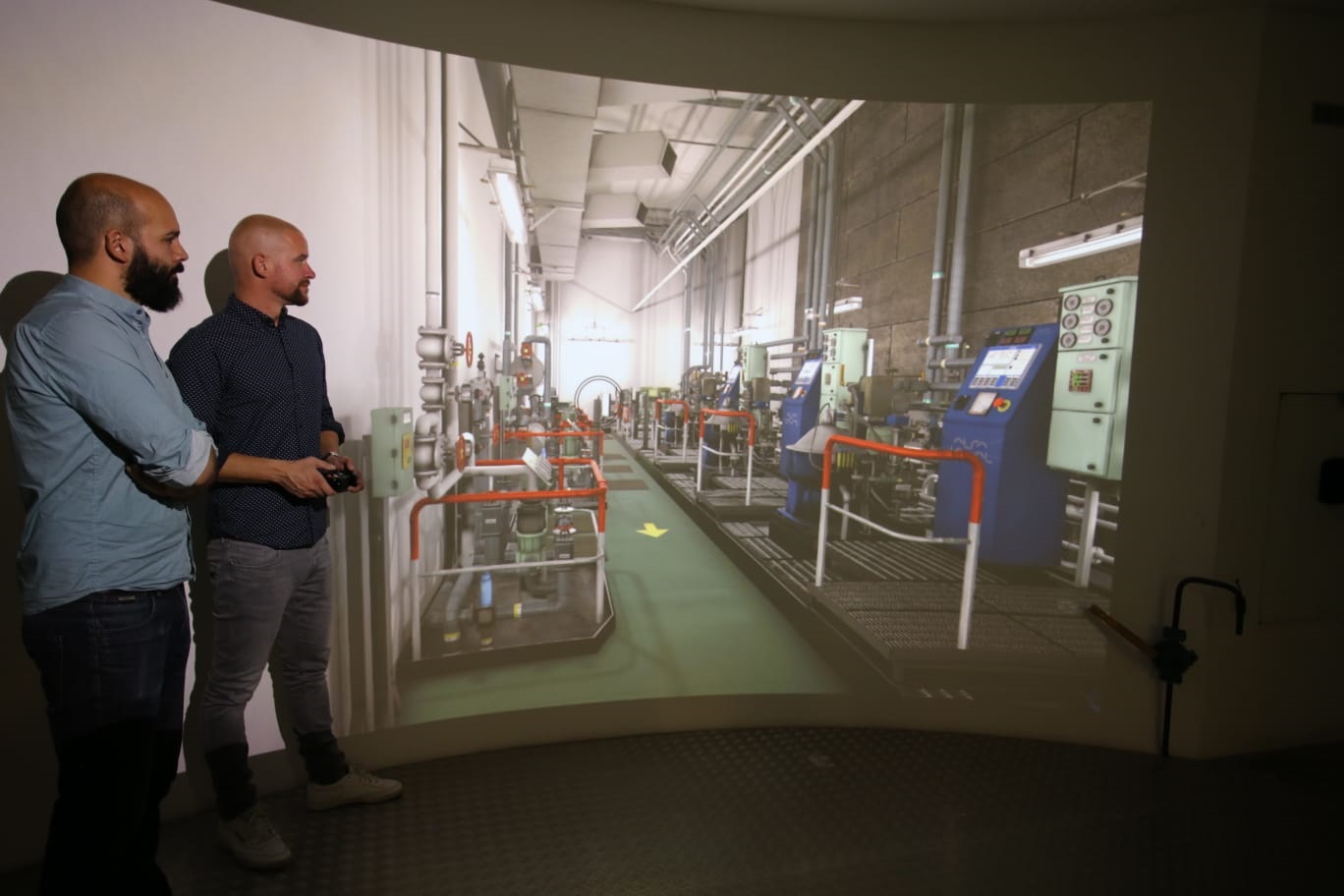 What does an engine room of a ship look like? How does it feel to walk around in it and to perform tasks? Until a few years ago, maritime students would mainly use their imagination, because practising on a real ship is not always possible. It mainly happens during internships. Thanks to the innovative strength of two software developers of Maritime Institute Willem Barentsz (MIWB), students today can experience what it is like to be in a real engine room by means of Virtual Reality. For years, Arjan van Vliet and Ralph Schaafsma worked on ever more complex virtual engine rooms. They did such a great job that Norwegian company Kongsberg Digital decided to market their product as part of their K-Sim Engine software.

Mapping reality
Back in 2011, when Arjan paid a visit to the Maritime Simulator Training Centre (MSTC) on Terschelling, his interest was piqued instantly. At that moment, only a basic graphical layer was used with Kongsberg Digital’s engine room model. “I remember thinking: we can do so much better nowadays in terms of graphics, piping, control units and interaction,” Arjan elaborates. After this, the MIWB offered him the opportunity to work on this project. He sailed on a freighter, the OOCL St. Petersburg with a MAK11 main engine, for two weeks. During this time, he mapped the entire engine room. When he had almost finished this, Kongsberg Digital started to show real interest. During development, he also made use of the expertise of the MIWB’s simulator instructors. It was the start of a fruitful collaboration between all the parties involved.

Innovation
It turned out to be a smart move, as Arjan and Ralph’s (as of 2012) simulations have since been in use all over the world, from the United States to the Philippines. Their work has had an enormous impact on maritime education. After the MAK11, the pair has moved on over the years to simulations of the MC90 and the M11-CNTNR, all of which are using Kongsberg Digital’s computational models and have been incorporated in their simulation software. The level of detail of these simulations were increased with every iteration. The latest simulator contains the engine room of an L11-ME-SCC, based on the Suez-Max oil freighter Ottoman Tenacity. “This is our most advanced model yet,” Arjan says. “It has a great amount of variables and graphically speaking it is almost an exact copy of the original vessel.”

Practical experience without dirtying your hands
The setup in Terschelling is being used by all maritime study programmes in the Netherlands and consists of a curved projector screen. Using a Virtual Reality headset or an XBOX controller, students can deal with various scenarios in virtual engine rooms. “For instance, an instructor may load a cold vessel with all of its systems shut down. A student is then tasked with preparing the ship for setting sail by starting up all systems,” Arjan explains. “Systems like starting air, cooling water and electrical power are all needed to get the main engine up and running. This way, students really learn how all systems function and how they interact with one another. By allowing them to make mistakes, students get the opportunity to learn the procedures by heart. Through trial and error, they can experience situations that are impossible to practice on a real vessel, such as overheating, fire and leakage. These are valuable experiences that students were not able to gain a few years ago.”

Checking in with the end user
Arjan and Ralph have their work cut out for them; there is still much ground to gain. “At Kongberg’s User Conference, we talk to a lot of end users from around the world. This is how we stay up-to-date on their wishes and we think about how we can incorporate this in the software,” Arjan points out. They also have short lines of communication with MIWB’s instructors, Arjan: “If there is anything with which they have difficulties, we are able to make changes instantly. This is how MIWB has a lot of influence on the subject matter, which is being used by educators from all over the world. It is quite a special feeling.”

Connections with the industry
Even though Kongsberg Digital, as the product owner, has final say concerning the software, both men are happy with the collaboration. “It is a two-way-street and it does feel like we are part of the team,” says Ralph. “We frequently go to Norway to work there and exchange knowledge. Together, we keep pushing the simulation market even further.”

An all-encompassing calamity model
Kongsberg Digital, in deliberation with MIWB’s instructors, is looking to develop a calamity simulation model that goes beyond the engine room. Arjan elaborates: “It means that we are going to map a whole lot more of a ship’s systems, enabling ship-wide calamity simulations.” Both Arjan and Ralph visualise the learning environment of tomorrow. “Over the last 1.5 years, we have also been in the process of developing a free-fall simulator,” Ralph reveals. “What do you do when you have to prepare for evacuation? If it is up to us, you will soon be able to practice this with many bells and whistles, including a moving platform to simulate the free-fall drop and sailing,” he adds. With these innovators, the MIWB will no doubt keep being a catalyst for high-quality maritime education.

About the Maritime Institute Willem Barentsz
The Maritime Institute Willem Barentsz, with its main offices in Terschelling, has a rich history. A nautical school has been present on the Dutch island ever since 1875. In other words: Terschelling has been the stage for over a 140 years of maritime education, with more than 40 years of simulator experience! Today, the institute has grown to be the best-equipped nautical technical institute in the Netherlands. The institute offers the Maritime Officer, Ocean Technology, and Naval Architecture bachelor programmes and the master programme Marine Shipping Innovations. In addition, professionals can also take several maritime courses. The institute has several professorships and it owns a state-of-the-art Simulator Centre. The MIWB is part of NHL Stenden University of Applied Sciences.