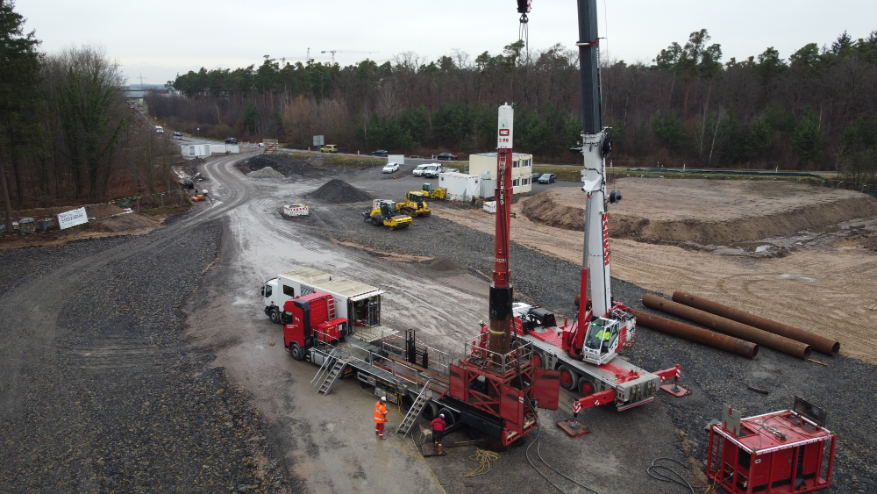 In Graben-Neudorf, Germany, near Karlsruhe, Deutsche ErdWärme is busy with the realization of its first geothermal project. Two wells will be drilled to a depth of around 3 700 metres to extract thermal water that will be used to generate electricity and heat for around 10 000 households.

The project in the Upper Rhine region is a first using the latest drilling and extraction techniques. The Wagenborg Foxdrill team was involved in several phases of this special project.

Wagenborg Foxdrill’s conductor specialists were involved early on in this innovative geothermal project by both the project’s main contractors, Huisman Geo and Ed. Züblin AG. One of the challenges for the team was to create two safe boreholes, each 36 metres deep in the upper earth layer. This was to shield the groundwater from the drilling activities.

A conductor piling solution proved to be the safest, cleanest and most efficient solution.  The Wagenborg Foxdrill team provided the complete scope for the conductor installation, including:

– Delivery of the 36” conductors

– Installation of the two conductors

Thanks to excellent preparation and cooperation with the client, the Wagenborg Foxdrill conductor team was able to carry out the conductor installation successfully.

“The conductor installation of these big was executed in a very well prepared, safe and well executed manner – in time and budget. We are looking forward to more jobs with Foxdrill for other upcoming conductor jobs” -Dr. Sebastian Homuth, Well Operation Manager, Deutsche Erdwärme.

In the meanwhile, preparations on the actual drilling operations had already started. For this purpose, the plan was to mobilize a Huisman LOC 400 drilling rig from the Czech Republic to the project site in Graben-Neudorf. But before this drilling rig could be brought in and deployed, a thorough inspection had to be executed. For this inspection scope, Wagenborg Foxdrill’s rig inspection and acceptance team was consulted.

Wagenborg Foxdrill’s rig inspection and acceptance specialists are multi-skilled: they are experts in mechanical, hydraulic, electrical, QHSE and compliance fields. First of all, the team examined the operational capacity and safety of the drilling rig for the intended drilling operation in Graben-Neudorf, as this rig had not been used for such geothermal drilling before.

Now it was a matter of getting the compliance and certification of the rig in order, so the rig would meet the legal requirements for the relevant drilling operations in Germany. At this point, the two Wagenborg Foxdrill surveyors proved to be of great value to the client too, with the result that the drilling rig could be transported to Germany on schedule and with the correct documents.

“We were in close communication and cooperation during the whole rig survey processes and have experienced a very professional and comprehensive service of high quality which was also delivered in the desired time and cost window.” – Dr. Sebastian Homuth, Well Operation Manager, Deutsche Erdwärme.

First time right – that is Wagenborg Foxdrill’s motto and also on the project in Graben-Neudorf, the Foxdrill team made a difference.